"Beyond Vietnam: Breaking the Silence"

Dr. Barbara Ransby (panel moderator).  African American studies and history professor Barbara Ransby completed her B.A. degree in history from Columbia University and an M.S. degree in history from University of Michigan, Ann Arbor. While at the University of Michigan, she taught African American studies. Ransby founded the Ella Baker-Nelson Mandela Center for Anti-Racist Education in 1988 and the African American Women in Defense of Ourselves Organization in 1991. She served as an instructor of history at DePaul University from 1992 to 1995; and an assistant professor and director of the Center for African American Research from 1995 to 1996. Ransby received her Ph.D. in history from the University of Michigan, Ann Arbor in 1996 - and joined the faculty of the University of Illinois, Chicago (UIC) as an assistant professor in the departments of history and African American studies.
In 1998, Ransby co-founded the Black Radical Congress and, in 2003, Ransby authored the award-winning biography of civil rights activist Ella Baker, entitled Ella Baker and the Black Freedom Movement. In 2004, she received the Coordinating Council for Women in History's Prelinger Award. Since 2008, Ransby has served as professor and director of UIC's Gender and Women Studies Department and in 2011, she was appointed interim vice provost for planning and programs at UIC. She has written many articles and contributed to several books on civil rights, black feminism and African American history.

Bill McKibben is founder and senior adviser emeritus of 350.org. His 1989 book, The End of Nature, has appeared in 24 languages. His work appears regularly in periodicals from the New Yorker and the New York Review of Books to Rolling Stone. He serves as the Schumann Distinguished Scholar in Environmental Studies at Middlebury College, as a fellow of the American Academy of Arts and Sciences, and he has won the Gandhi Peace Prize as well the Right Livelihood Award, sometimes called the alternative Nobel, in the Swedish Parliament. Foreign Policy named him to its inaugural list of the world’s 100 most important global thinkers.  McKibben played a leading role in launching the opposition to big oil pipeline projects, and the fossil fuel divestment campaign, which has become the biggest anti-corporate campaign in history, with endowments worth more than $15 trillion stepping back from oil, gas and coal.

Dr. Corrine Sanchez of San Ildefonso Pueblo is Executive Director of Tewa Women United and has 25 years of sexual assault intervention and prevention training. She holds her doctorate from Arizona State University in Justice Studies and helped refine Tewa Women United’s awareness and healing intervention, “Trauma Rocks”. Dr. Sanchez has been part of the co-creation process of building Indigenous Knowledge through the contribution of TWU’s Research Methodology and Theory of Opide, a braiding of practice to action. Dr. Sanchez was one of sixteen visionary leaders across the country selected as the first cohort of the Move to End Violence.

Ash-Lee Woodard Henderson is a 33-year-old, Affrilachian (Black Appalachian), working class woman, born and raised in Southeast Tennessee. She is past president of the Black Affairs Association at East Tennessee State University and holds a B.A. in English with a minor in African and African American History. She has extensive experience with community organizing and is a former staff member of the Chicago SNCC History Project, and a past member of the United Students Against Sweatshops National Coordinating, Political Education and Collective Liberation
Additionally, Ash-Lee is a long-time activist working around issues of mountaintop removal mining, and environmental racism in central and southern Appalachia, and has served on the National Council of the Student Environmental Action Coalition. She is an active participant in the Movement for Black Lives and a member of the board of directors for the Philanthropic Initiative for Racial Equity.

Medea Benjamin is the co-founder of the women-led peace group CODEPINK and the co-founder of the human rights group Global Exchange. She has been an advocate for social justice for more than 40 years. Described as "one of America's most committed -- and most effective -- fighters for human rights" by New York Newsday, and "one of the high profile leaders of the peace movement" by the Los Angeles Times, she was one of 1,000 exemplary women from 140 countries nominated to receive the Nobel Peace Prize on behalf of the millions of women who do the essential work of peace worldwide.
She is the author of ten books, including Drone Warfare: Killing by Remote Control and Kingdom of the Unjust: Behind the U.S.-Saudi Connection. Her most recent book, Inside Iran: The Real History and Politics of the Islamic Republic of Iran, is part of a campaign to prevent a war with Iran and instead promote normal trade and diplomatic relations.
Her articles appear regularly in outlets such as The Guardian, The Huffington Post, CommonDreams, Alternet and The Hill. Medea can be reached at: medea@codepink.org or @medeabenjamin.
Introduction to readings and panel

Reverend Dick Fernandez became the first Executive Director of Clergy and Laity Concerned (CALCAV) in January of 1966 following a short two year stint as a campus minister at the University of Pennsylvania. CALCAV was started by a group of prominent clergy in the fall of 1965 including, Reverend William Sloane Coffin, Father Phillip Berrrigan, Rabbi Abraham Joshua Heschel, Reverend Richard Neuhaus and Rabbi Balfour Brickner.
As an interfaith and non-pacifist organization it had wide appeal across the nation. Dick set about to create an organization that by 1969 had 65 chapters and more than 20,000 members. In addition to its grass roots organizing efforts across the country and its annual clergy and laity lobbying/protest effort in Washington, CALCAV was responsible for authoring several books including, In the Name of America, a study of war crimes committed by U.S. troops and Military Chaplains, a critical look at the role of chaplains during war. In addition the organization placed a chaplain in Stockholm to support the more than 2,000 deserters in Sweden and mounted a national advertising campaign against the war engaging ad firms in New York and San Francisco.
CALCAV organized Dr. King’s famous 1967 Vietnam speech in opposition to the war at Riverside Church in New York City. King became a Co-Chair of CALCAV immediately following that speech. Few organizations did more to organize in the cities and towns across the nation. Dick served, with Lee Webb, as the Co-Director of Vietnam Summer and was very involved with the Mobilization to End the War which was responsible for many of the nation’s largest anti-war protests.
Watch the April 4 international zoom reading and webinar with friends, either physically or at the same time on line.  Plan a zoom meeting or conference call amongst yourselves for a day or two afterward to discuss organizing a local reading later in the month and/or to get the ball rolling for an even more significant event or events for the anniversary in 2022.

Michelle Alexander, the author of "The New Jim Crow", gave a moving eight minute speech about Beyond Vietnam at the Riverside Church 50th anniversary program.  Watch it here.

Please send information about your local event and any questions you have to:   info@kingandbreakingsilence.org 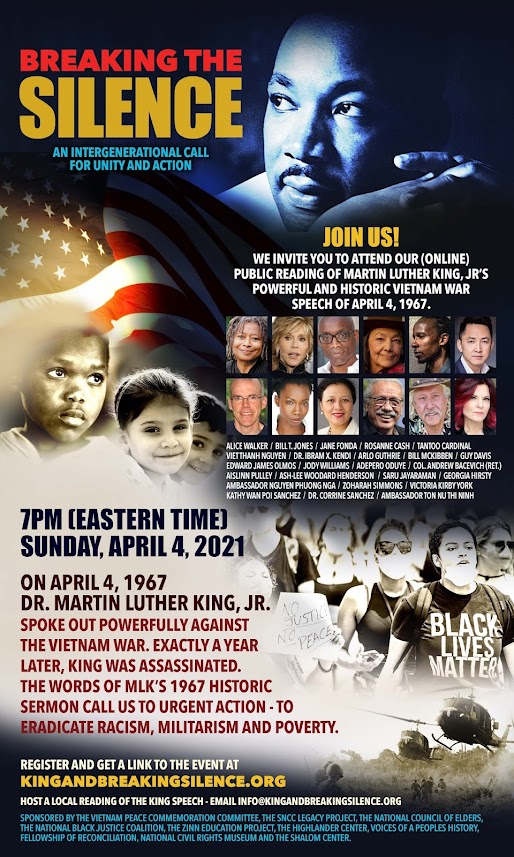